The concept of the pro robot series was only the first step the WITTMANN Group took towards a completely new robot series. After extensive testing, the first appliance from the new WX robot series, WX163, is being rolled out at this year’s Fakuma show in Friedrichshafen, Germany. 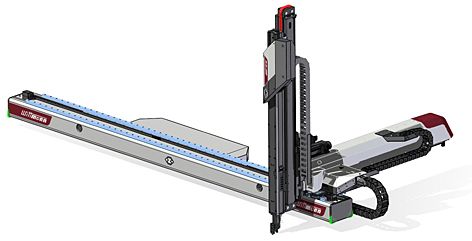 So far, the robot models W853 (75 kg load capacity) and W873 (125 kg load capacity) have been known as the top-end models of the handling appliances in the WITTMANN portfolio. They are used primarily on injection molding machines with clamping forces from 1,800 t upwards. Due to the generally increasing importance of automation and especially the rising number of enquiries from the white goods or household goods sectors, a demand has emerged for a new hybrid model. The answer is now the new WX163. The concept of the new robot is based on both the W853, which has been proven for many years, and the new W843 pro – a highly interesting combination for many a plastics processor.

In its basic configuration, the WX163 can handle a load of 45 kg. In this version, a combined pneumatic C-axis with an exceptionally high torque is used. As well as the high torque, this solution offers the added benefits of a variable assembly area being available for the removal gripper and a dramatic improvement in the entire system’s torsional rigidity.

The comprehensive modular system of additional WITTMANN axes makes it possible to use the proven components of other robot models with the WX163. This helps to minimize costs and ensures that at the time of its market launch up to three additional servo axes are available for the new model. The rotary servo axes A, B and C are triggered by controllers integrated in the robot. Consequently, it is not necessary to enlarge the control cabinet or change its position – a very genuine WITTMANN solution.

The axis structure is traditional: horizontal strokes are available up to a maximum of 18,000 mm, the demolding axes offer a stroke of 1,500 mm, and the vertical stroke is 2,600 mm.

The WX163 features an intelligent combination of steel and aluminum components, which ensures both high dynamism and excellent rigidity. Of course the appliances from the WX series are also fitted with ambiLED, already known from the pro series. The light signal at the end of the horizontal bar facilitates checking of the robot’s status. The automatic mode is visualized by a green light signal, blue indicates a phase stop or manual operation, and red stands for an open safety gate or an interruption of the safety circuit. Options for the W robot series, such as EcoVacuum and monitoring of the vacuum system, are also available.

The new WX163 robot comes with the latest version of the internally installed WITTMANN CNC9 control system and the R9 manual input terminal as standard. Its functionality is largely identical with that of the proven R8 version, but further refined with various additional visualization options, a display now enlarged to 10.1" with multitouch attributes, and special step keys for setup.

Naturally, the R9 TeachBox (THE manual input terminal from WITTMANN) continues to provide the familiar programming and teaching environments such as TextEditor, QuickEdit and the Wizard. So downward compatibility with existing older program versions is a given.

“The Fakuma will be a particularly important event for us this year. After all, we are not able to present two new handling appliances simultaneously every day. They also target two different segments: pick & place applications with PRIMUS 14, and the large machine sector with WX163”, says Martin Stammhammer, International Sales Manager Robots and Automation Systems of the WITTMANN Group. “In the new WX163, we see some advantages due to the material mix, which has enabled us to give the appliance a compact design. In spite of this, we have succeeded once more in increasing its rigidity, compared to the W843 pro.”

The WITTMANN Group is a worldwide leader in the manufacturing of injection molding machines, robots and peripheral equipment for the plastics industry. Headquartered in Vienna/Austria, the WITTMANN Group consists of two main divisions, WITTMANN BATTENFELD and WITTMANN, which operate 8 production facilities in 5 countries, including 33 direct subsidiary offices located in all major plastics markets around the world.

WITTMANN BATTENFELD focuses on the independent market growth in the manufacturing of state-of-the-art injection molding machines and process technology, providing a modern and comprehensive range of machinery in a modular design that meets the actual and future requirements of the plastic injection molding market.

The syndication of the WITTMANN Group has led to connectivity between all product lines, providing the advantage plastics processors have been looking for in terms of a seamless integration of injection molding machines, automation and auxiliary equipment – all occurring at a progressive rate.